Jetstar CEO says he will not bow to 'unsustainable' union demands 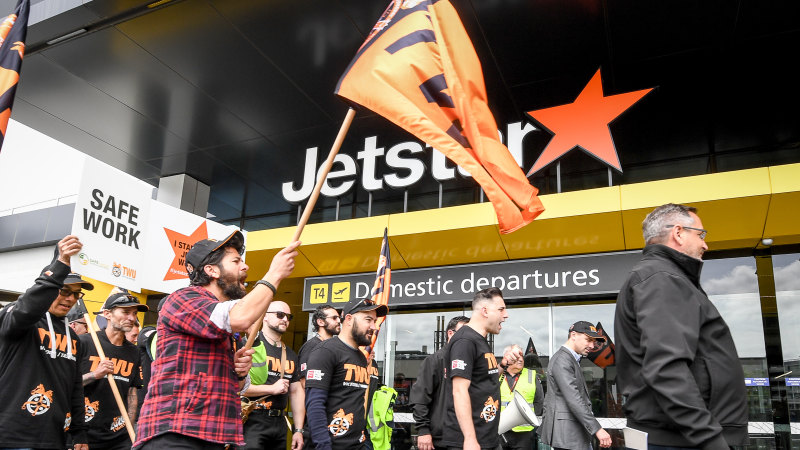 Holidaymakers and travellers could face further disruptions in the coming weeks after Jetstar's CEO said the budget airline will not bow to "unsustainable" union demands.

Jetstar cancelled 44 flights on Saturday as pilots took part in a four-hour strike. Another 46 flights scheduled for Sunday have also been cancelled as pilots prepare to strike for a further four hours.

The weekend strikes come after 20 Jetstar flights were cancelled on Friday when ground crew and baggage handlers walked off the job at several major airports. 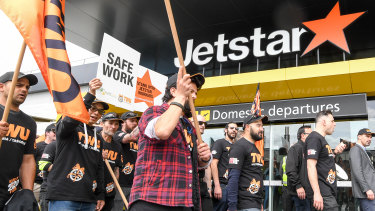 Jetstar workers on strike at Melbourne airport on Friday.Credit:Justin McManus

Jetstar passengers face further delays and cancellations next week with industrial action by ground crew and pilots set to continue amid a standoff with management that shows no sign of ending anytime soon.

On Saturday, Jetstar CEO Gareth Evans gave no indication there would be any immediate end to the dispute, claiming the demands of the Australian Federation of Air Pilots – the union which represents about 700 of the airline's 800 pilots – amounted to a 15 per cent pay rise in the first year, which was "unsustainable" and could push up airfares for customers.

"We want to get to an agreement but not at any cost," Mr Evans said. "If we agreed to the cost increases from the AFAP and the TWU [Transport Workers Union], that would put unbelievable pressure on our business model, and it would put unsustainable upward pressure on low fares, which is at the heart of what we do." 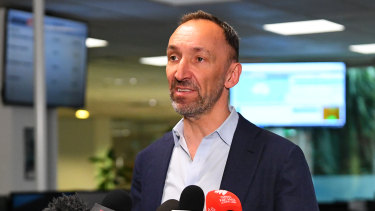 Mr Evans said the offer Jetstar had on the table for its pilots equated to a 3 per cent pay rise.

"Captain's earn over $300,000 a year. They work 30 per cent less than the average Australian and that level of pay rise [15 per cent] simply isn't sustainable," he said.

"What we're trying to achieve is an outcome that provides a sustainable outcome for the business for the long term so that we can continue to grow the airline and offer low fares to our customers."

The Transport Workers Union said on Friday afternoon that ground crew and baggage handlers would strike again on Thursday after Jetstar rejected its demands over a new wage deal.

"We apologise to the travelling public for the disruption and we want to emphasise that this is the only course that Jetstar has left workers to take," said TWU national secretary Michael Kaine.

Australian Federation of Air Pilots has not announced any strike action beyond this weekend, but will conduct potentially disruptive low-level action, including refusing to be called in to work on rostered days off, or working outside their rostered hours.

The pilots union has said it will pause its action through the peak holiday travel period of December 21 to January 3, but has the option of resuming strike action after that.

Jetstar is offering any customers travelling between now and December 20, a full refund at any time, regardless of whether their flight is impacted by the industrial action.

"We appreciate how this industrial action … is having an effect of uncertainty and frustration for our customers and we are doing everything that we possibly can here to minimise disruption to customers to try and get everyone away on their original day of travel," Mr Evans said.

"We pretty much achieved that yesterday and things are going pretty well again today. But we certainly appreciate how frustrating it is for our customers."

On Thursday afternoon SafeWork NSW ordered Jetstar to improve the safety of its ground crew operations after an inspection at Sydney Airport discovered staff were at risk of serious injury.

That included "being crushed, ingested or other" due to "inadequate safe work procedures", which the TWU said validated its claim that Jetstar's staff levels were "dangerously low".

A copy of the SafeWork notice seen by The Age and The Sydney Morning Herald says Jetstar failed to ensure that a full crew of four workers and one supervisor remained allocated to an aircraft until all tasks were completed and before they moved on to work on another plane.

This weekend was the first time Jetstar pilots have taken protected industrial action since the airline was founded 15 years ago, and it comes as industrial tension across the Qantas group rises to its highest level since Alan Joyce's grounding of the Qantas fleet in 2011.

Source: Read Full Article
B CEO he Jetstar not says will