Opioid deaths rise after car-factory closures, according to a study over two decades 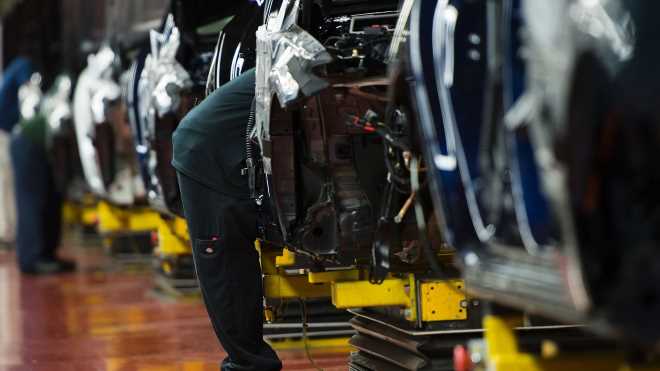 The closing of a car factory can be an economic gut punch for the surrounding community, but new research suggests there could also be ramifications for those laid-off workers.

Over nearly two decades, counties where automotive plants closed saw an increase in the rate of opioid overdose deaths after the closures compared to counties where plants stayed open, a study published Monday in JAMA Internal Medicine found. The work was supported by a grant from the Robert Wood Johnson Foundation, a nonprofit organization based in Princeton, N.J.

Disappearing manufacturing jobs are a dark spot in a brightening economy, with unemployment at a 50-year low and wages on the rise for many American workers this year. At the same time, income inequality has worsened as the loss of manufacturing jobs has closed off traditional paths to the middle class, especially for people who don’t have a college degree.

“We’ve noticed over the last 40 years as the erosion of the American dream may be incredibly consequential for population health,” said co-author Atheendar S. Venkataramani, an assistant professor of medical ethics and health policy at the University of Pennsylvania.

“We’ve always thought of these problems — the attack on the American dream and health — as distinct things, but these phenomena are in fact related in a way that policymakers should be more cognizant of,” Venkataramani added.

The study was co-authored by University of Pennsylvania, Massachusetts General Hospital, Yale University and Harvard Medical School researchers, who looked at opioid overdose deaths in 112 counties between 1999 and 2016. “Automotive assembly plant closures were associated with statistically significant increases in opioid overdose mortality,” they concluded.

The biggest increases in opioid overdose deaths happened among non-Hispanic white men between the ages of 18 and 65.

Researchers found correlation, not causation, between the plant closures and the opioid overdose deaths. The study’s findings should, the researchers note, be taken in context with the opioid epidemic that has impacted millions of people across the country.

“During the past two decades, the U.S. has experienced a widespread and significant increase in opioid overdose mortality, particularly among working-age adults,” they wrote. “Recent work has shown that supply-side factors (for example, physician-prescribing behavior and increasing availability of synthetic opioids) are associated with increased opioid dependence and risk of overdose. Consequently, policy and programmatic responses to the opioid overdose crisis have emphasized reducing the supply of opioids.”

Declining economic opportunity in the wake of the plant closures or other economic shocks could “reduce people’s incentive to stay healthy or may increase hopelessness and despair, which can result in a number of health conditions including substance use disorder,” Venkataramani told MarketWatch.

It may also be due to losing private health insurance and reduced access to affordable health care, compounded by pre-existing conditions and/or injuries, he added.

General Motors GM, -0.33% recently sold a plant in Lordstown, Ohio, and closed factories in Michigan and Maryland under its recent contract agreement with the United Auto Workers union.

All affected hourly employees at these three plants were offered jobs at other GM manufacturing facilities as long as they were willing to relocate, with relocation assistance of up to $30,000 provided to employees, said GM spokesman David Barnas.

Barnas said he wasn’t familiar with the JAMA study and, as such, declined to comment on it.

He added that General Motors’ average hourly employee earns about $90,000 per year before benefits, which is almost 47% higher than the national median income of $61,372, according to the U.S. Census Bureau.

Plant closures, and what to do about them, have been a point of contention among Democrats vying for the presidential nomination.

Life expectancies for Americans have been shrinking, and previous studies have explored the potential relationship between declining economic opportunities and the rise of so-called deaths of despair, which include opioid overdoses. But findings have been mixed, the researchers in the latest study noted.

A paper circulated by the National Bureau of Economic Research in 2019 suggested there was “no simple causal relationship between economic conditions and the abuse of opioids.”

“Therefore, while improving economic conditions in depressed areas is desirable for many reasons, it is unlikely on its own to curb the opioid epidemic,” wrote the authors, three Princeton University professors.

The researchers behind the new study wanted to examine automotive plant closures because they are often unexpected, discrete events that are both culturally and economically significant, they wrote. One question that guided the research, said Venkataramani: “When there are events that change economic opportunity and the way people view their future, what does that do to their health?”

“[O]ur findings, combined with a growing body of research demonstrating adverse associations between trade-related industrial decline and drug overdose mortality, lend support to the view that the current opioid-overdose crisis may be associated in part with the same structural changes to the U.S. economy that have been responsible for worsening overall mortality among less-educated adults since the 1980s,” the authors wrote.

The results also give weight to the possibility that worsening health among less-educated adults in the South and Midwest is related to shrinking economic opportunities, the researchers said.

The researchers cautioned that these findings shouldn’t diminish the role of opioid supply (from both doctors’ prescriptions and illegal sources) in the opioid crisis. But the new findings give credence to the idea of addressing the opioid crisis by both limiting supply and strengthening treatment options in parts of the country that have been hard hit by “structural economic change,” they said. “We should be ramping up screening and treatment in places where there’s a higher risk of these closures,” Venkataramani said.

He said he also hoped the findings would inform policymakers as they contend with the often-repeated cycle of industries arriving and disappearing from the American economy.

“One thing we haven’t thought about is how can we design our public policies to make places resilient, so that when there are these structural economic changes, people don’t get sick as a result,” Venkataramani said.