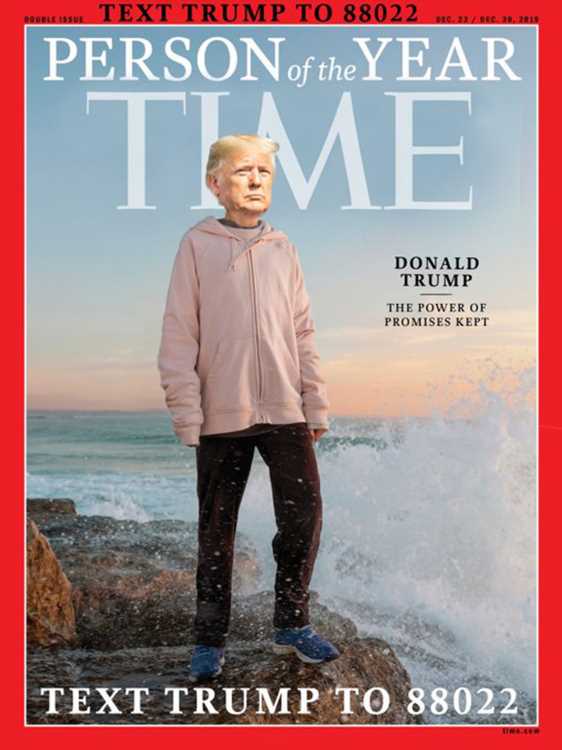 President Donald Trump‘s re-election campaign has routinely made bizarre, even trolling choices in order to go viral while promoting him and his agenda.

The manipulation of Thunberg’s “Person of the Year” cover shows Trump’s 73-year-old head pasted onto her 16-year-old body along with a list of his 2016 campaign promises that his re-election team claims he has already accomplished.

“There’s only one Person of The Year,” the campaign wrote with the altered cover. (Trump, noted for his love of being on magazines, has a special fascination with TIME, even making fake covers in the past.)

Trump, who was named a finalist for TIME’s “Person of the Year” honor earlier in 2019, was not happy the distinction went to Thunberg.

“So ridiculous,” he tweeted Thursday, sarcastically adding, “Greta must work on her Anger Management problem, then go to a good old fashioned movie with a friend! Chill Greta, Chill!”

The teen activist, who has become a global face for the urgency of addressing climate change, responded by subtly changing her Twitter bio to read “a teenager working on her anger management problem. Currently chilling and watching a good old fashioned movie with a friend.”

Thunberg had a similar response when Trump previously attacked her on Twitter back in September. Former First Lady Michelle Obama was among those who supported Thunberg this time around, tweeting to her directly: “Don’t let anyone dim your light. … Ignore the doubters and know that millions of people are cheering you on.”

Earlier this week, the Trump campaign became the butt of many Twitter jokes after sharing an edited clip from Avengers: Endgame which turned the president into the Marvel supervillain Thanos.

Twitter users were quick to point out the irony of comparing Trump to a mass-murdering villain who ultimately fails at the end of the movie.

“Thanos was the bad guy who was eventually defeated by the good guys. So great meme, idiots,” one user bluntly responded.

The campaign’s photo edit of Trump and Thunberg was equally met with ridicule on Friday.

“How truly childlike & embarrassing to this country,” one user wrote. Others responses included a list of criticisms and claims against the president as well as a political cartoon of Thunberg spanking Trump.

In a statement, Melania Trump‘s spokeswoman appeared to say the first lady had differed with the president’s decision to attack Thunberg.

For her part, Thunberg this week responded to the argument that her climate activism was political.

“If anyone thinks that what I and the science are saying is advocating for a political view – then that says more about that person than about me,” she tweeted Thursday. “That being said – some are certainly failing more than others.”