Bill Gates says he’s happy to pay $20 billion in taxes, but Warren’s plan will make him ‘do a little math on what I have left over’ 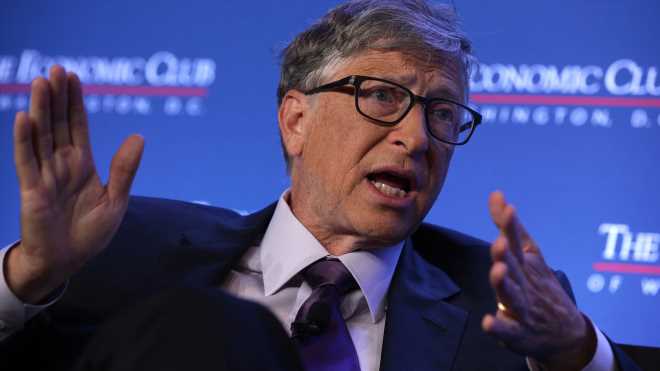 Bill Gates, the Microsoft co-founder, waded deep into the hotly debated topic of taxing the wealthy to redistribute money to the have-nots — a contentious issue on which Sen. Elizabeth Warren has been at the forefront in her bid to become the 2020 Democratic presidential nominee.

On Wednesday, speaking at the New York Times DealBook Conference, Gates, who boasts a net worth of $106.8 billion, according to Forbes (making him the second wealthiest man in the world behind Amazon.com’sAMZN, -1.21%Jeff Bezos) said he’s happy to pay his share of taxes but expressed consternation that Warren’s proposals might go too far for many deep-pocketed Americans worried about those taxes eroding their fortunes:

Gates went on to say he was doubtful the hard-charging Warren would be willing to meet with him, based on her recent rhetoric directed toward billionaires, including Leon Cooperman, the founder of Omega Advisors, who has clashed recently with the Massachusetts senator. “You know, I’m not sure how open-minded she is or that she’d be willing to sit down with someone who has large amounts of money,” Gates said, responding to a question about whether he would speak with Warren about his concerns.

As it turns out, however, Warren was eager to have a sit-down with the MicrosoftMSFT, -1.25%billionaire, as she said in a tweet Wednesday. “I’m always happy to meet with people, even if we have different views. @BillGates, if we get the chance, I’d love to explain exactly how much you’d pay under my wealth tax. (I promise it’s not $100 billion.),” she wrote.

Warren’s wealth tax is a proposed 2% annual levy on household wealth above $50 million and an additional 1% tax on wealth above $1 billion. It would affect about 75,000 households and raise between $2.6 trillion to $2.75 trillion over a decade, the Wall Street Journal reported.

A number of 1%-ers have voiced a concern that it could appear wealth is being vilified. “You really want the incentive system to be there, and you can go a long ways without threatening that,” Gates said.

The push for a wealth tax and increasing discussions about income inequality in the U.S. come as the major U.S. equity-market benchmarks, the Dow Jones Industrial AverageDJIA, -0.81% , the broader S&P 500SPX, -0.71%and the tech-heavy Nasdaq CompositeCOMP, -0.79%notch all-time highs.

There are more than 600 billionaires in the U.S., with more than 40% of them residing in California and New York, according to U.S. News & World Report.

Gates is among a group of billionaire philanthropists who have said they would give away at least half their wealth to charities under terms of the Giving Pledge.

Check out the Gates comments on CNBC: