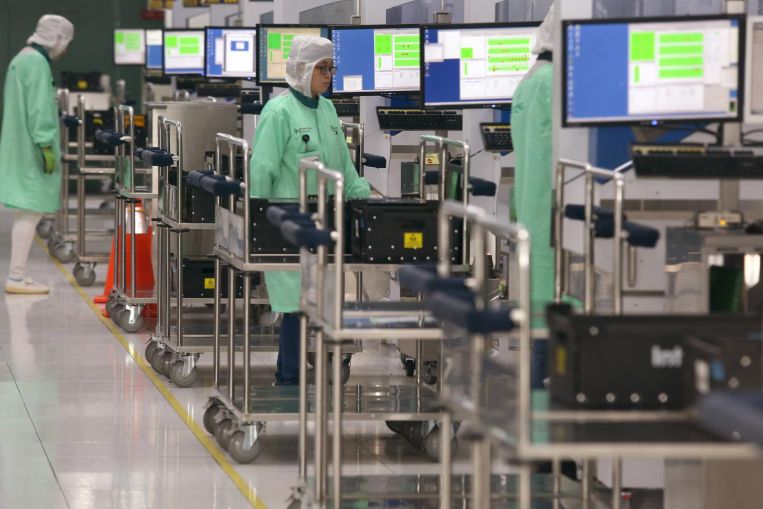 SINGAPORE – Manufacturers, led by those in the semiconductor industry, expect business conditions to improve in the first half of this year outnumbering those who hold a softer outlook, according to the latest quarterly survey by the Economic Development Board (EDB).

The electronics cluster was the most optimistic, with a net weighted balance of 23 per cent expecting an improved operating environment.

“The positive outlook is largely attributed to the semiconductors segment which expects demand to improve, on the back of the roll-out of 5G technology, as well as expectations that the US-China trade conflict is unlikely to deteriorate further,” according to an EDB press release on Friday (Jan 31).

A weighted 19 per cent of the manufacturers anticipate better conditions, while only seven per cent expect business to worsen.

Overall, this equates to a net weighted balance of 12 per cent of manufacturers predicting an improvement for the first six months of 2020.

This contrasts with the net weighted balance of 5 per cent anticipating a less favourable situation in the previous quarterly survey.

Within the manufacturing sector, all clusters except the general manufacturing industries foresee better business prospects in the first half.

Manufacturing – which makes up about one-fifth of Singapore’s economy – has been roiled by uncertainties from the trade conflict, slowing demand in China, and the peaking of the semiconductor cycle in the past year.

In the transport engineering cluster, a net weighted balance of 15 per cent of firms foresee better business prospects, while the marine & offshore engineering segment continues to anticipate a modest uptick in demand for ship repairing activities and oil & gas-field equipment.

The general manufacturing industries cluster is the least optimistic about the operating environment. A net weighted balance of 4 per cent of firms anticipate a less favourable business situation in the next six months.

Within the cluster, the food, beverages & tobacco segment expects seasonally weaker orders in the first quarter of the year, while the printing segment anticipates increased digital adoption to continually weigh on demand for print jobs.

A separate survey by the Department of Statistics (Singstat) on the services sector, also released on Friday, showed business expectations of services firms have moderated for the first half of 2020.

While this is weaker than the outlook for October 2019-March 2020 period, it represents an improvement over the results in the same period last year.

Within the services sector, the financial and insurance; information and communications; and personal services industries foresee more favourable conditions.

The accommodation, retail trade and food and beverage services are less optimistic.