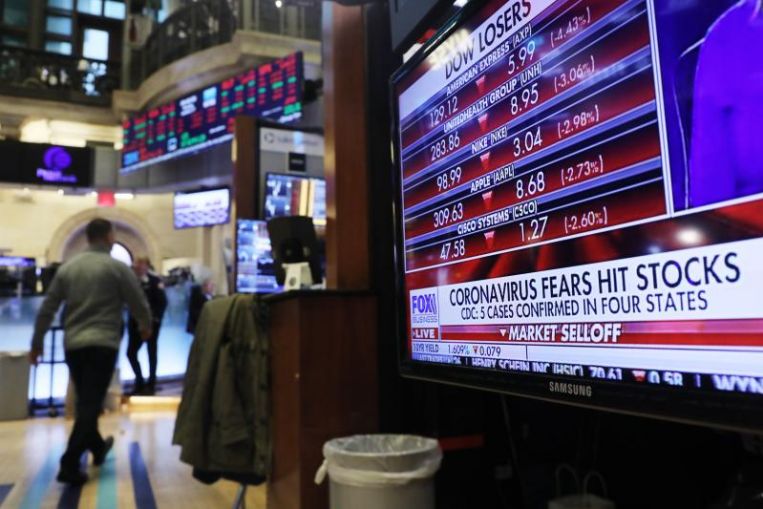 NEW YORK (REUTERS) – US stocks suffered their worst day in over three months on Monday (Jan 27) as China extended the Lunar New Year holiday due to a virus outbreak, fuelling worries about the economic impact of containment efforts in the world’s second largest economy.

The benchmark S&P 500 suffered its worst weekly performance since September last week as China locked down several cities and curbed travel, reminding investors of the deadly Sars virus that killed nearly 800 people in 2002-03 and cost the global economy billions.

Still, some investors viewed any long-term economic impact as unlikely, given past experiences with viral outbreaks.

“It seems to me the Chinese are doing a much better job of containing it than with Sars and what did Sars ultimately lead to? Did it lead to some sort of economic catastrophe – no.”

After the 2003 Sars(Severe Acute Respiratory Syndrome) outbreak, the S&P rallied more than 10% from the start of the outbreak to the announcement of its containment.

Travel-related stocks, including airlines, casinos and hotels, were among the hardest hit on Wall Street, while shares of sectors exposed to China’s growth, including technology, materials and energy, pressured the markets.

Adding to downside pressure was the sluggish start to corporate earnings season with indexes near record levels.

Earnings are now expected to show a decline of 0.5% for the fourth quarter, according to Refinitiv data. Of the 87 companies that have reported though Monday morning, 67.8 have topped expectations, below the 74% rate from the past four quarters.

The Dow and S&P has their biggest one-day percentage drop since Oct 2 while the Nasdaq’s fall was its largest since Aug 23. Wall Street’s fear gauge, the CBOE Volatility index, reached 19.02, its highest since Oct 10.

Technology and internet heavyweights that have powered the recent rally including Apple Inc, Microsoft Corp , Alphabet Inc and Amazon.com Inc, which account for about 15% of the S&P 500 weighting, lost at least 1.6%.

Yum China Holdings Inc tumbled 5.27% after the company said it had temporarily closed some of its KFC and Pizza Hut stores in Wuhan, the epicenter of the outbreak.

The rush to safe-haven assets sank U.S. Treasury yields, with the benchmark 10-year note falling as low as 1.603%, its lowest since Oct. 10, and the yield curve between the two-year and 5-year inverting for the first time since Dec. 4, putting pressure on lenders. The S&P 500 banks index was down 1.42%.

The S&P energy index dropped 2.76% as crude prices settled down about 2% on fears the outbreak would dent demand.

Fourth-quarter earnings will kick into high gear this week with 141 of the S&P 500 companies, including Apple, Microsoft Corp and Boeing Co, reporting.

Declining issues outnumbered advancing ones on the NYSE by a 3.63-to-1 ratio; on Nasdaq, a 3.25-to-1 ratio favored decliners.

About 8.11 billion shares changed hands in U.S. exchanges, compared with the 7.31 billion daily average over the last 20 sessions.