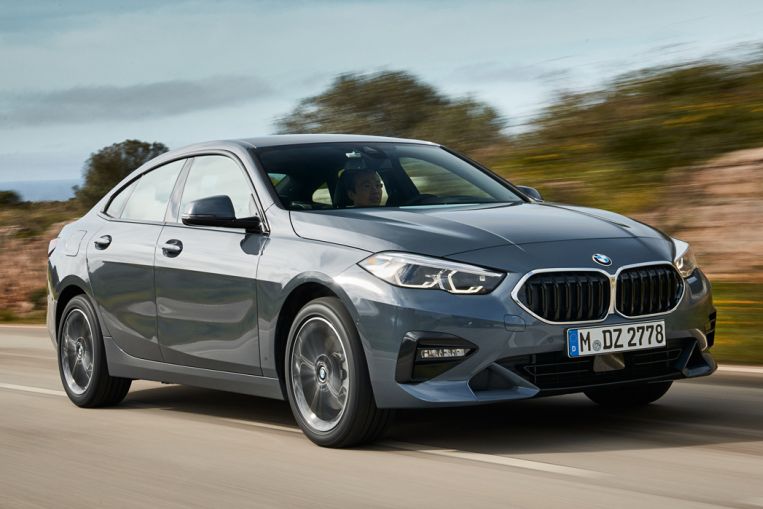 The latest, a four-door sedan, which goes head on with Mercedes’ CLA saloon, is based on the latest 1-series hatch. Being a 1-series spin-off, it retains the donor car’s transverse engine and front-drive layout (except for the range-topping M235i, which is all-wheel-driven).

BMW calls it a Gran Coupe because it says the car’s arched roofline and frameless windows give it coupe-like looks. The pictures speak for themselves, so I will let you be the judge of that.

If the cabin of the 2-series Gran Coupe (let’s call it the 2GC) looks familiar, it is because the dashboard is lifted from the 1-series – not a bad thing since it is pleasantly styled and logically laid out, although the digital instrument display with its fussy C-shaped speedometer and rev counter dials is a far cry from the simple clarity of the twin round dials that were such an iconic BMW feature for more than four decades.

There is ample headroom over the front seats. Rear legroom is par for the class, but rear headroom is slightly limited by the descending roofline.

The boot is huge – long and deep, although the hinges do intrude slightly.

All-round visibility is good, save for the view out the shallow rear screen. This being a BMW, cabin ergonomics are beyond reproach and material choice is excellent, with great switchgear feel and a sense of enduring quality.

The base model in Singapore will be the 218i, which is powered by a 1.5-litre turbocharged 3-cylinder already found in many other BMW models, as well as the Mini One and Cooper. It is a lovely motor, delivering its 140bhp and 220Nm in a wonderfully linear fashion and revving eagerly, with a muted but cheerful thrum in the low and mid ranges.

The seven-speed dual-clutch transmission it is mated to swops gears smoothly and quickly. In Sport mode, the gearbox is also intuitive in knowing when to downshift for bends, which proved a great help on the twisty mountain roads along the test route.

The 2GC’s chassis is a peach. The car changes direction very keenly, rides bumps well and remains very poised even in tightening bends. Its steering is quick, linear and nicely weighted, although more feedback would be useful to tell the driver where the limits of adhesion are.

Back off to a cruise, and the car is a relaxed mile-muncher, loping along in relative silence on the highway, the suspension soaking up bumps without feeling too soft or too taut.

I also tried the range-topping M235i, which has firmer, lower suspension, adaptive dampers, larger brakes, sport steering with a slightly quicker rack, extra bracing between the front struts and on the rear axle, and firmer anti-roll bar mountings.

It also has more than twice the 218i’s output, with 306bhp and 450Nm from its turbocharged 2-litre four-cylinder engine, channelled to four wheels through an eight-speed autobox with paddle shift.

On the road, the M235i spices things up with a sportier, more urgent edge. Coupled with the traction benefits of all-wheel-drive, it charges to 100kmh in just 4.9 seconds. Wet roads during the test deterred me from exploring the car’s limits, but even driven moderately, the M235i feels noticeably keener and sharper than the 218i.

Its steering is meatier and it directs a chassis with considerably more grip. There is less roll around corners and tighter body control over undulations (especially with the adaptive suspension in its Sport setting), so that it carves through bends with even more pace and poise.

The 2GC’s name may be slightly bewildering, but there is nothing confusing about the way it drives. That blue-and-white propeller badge on its nose is fully earned.