Businessman and former federal MP Clive Palmer has linked fresh charges brought against him by the corporate watchdog to his company Mineralogy's dispute with former business partner Citic, claiming they hold "no merit".

The Australian Securities and Investments Commission commissioner John Price on Friday told a joint parliamentary committee Mr Palmer had been charged with four offences relating to alleged misconduct in 2013, the year he was elected to Parliament. 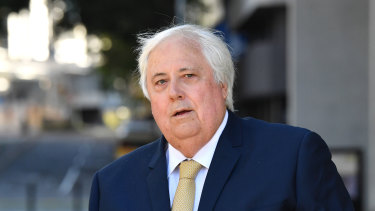 Clive Palmer has hit out at Australia’s corporate watchdog over fresh charges laid against him this month.Credit:AAP

The charges – of dishonestly gaining a benefit and misusing his position as a director – are due to be heard in Brisbane's Magistrates Court on March 20.

In a statement Sunday, Mr Palmer said the matters related to his company at a stage when it was dealing with his funds alone and there was no alleged victim.

"There was no merit in the ASIC summons and it would be shown to be yet another ASIC embarrassment," he said. "The ASIC summons relates to two payments that were paid by Mineralogy from its own account with its own money approved by its sole director and its sole beneficial shareholder – me."

"There is no accusation in the ASIC summons that I received any benefit whatsoever or that any person was denied or lost any property."

Mr Palmer said the Chinese government-owned Citic Limited had "instigated these matters" when they provided information to police amid the 2013 spat over mining loyalties.

After investigations were launched by West Australian and Queensland police and "no charges … brought by either police force against anyone", ASIC had brought the charges "after meeting with Chinese representatives".

Citic launched a court battle against Mr Palmer after his 2013 election campaign, claiming he committed a breach of trust when he redirected $12 million to the Palmer United Party from a fund set up to run a West Australian port.

Queensland Supreme Court Justice David Jackson later ruled the money – paid back before the trial began – was not part of a trust.

During the corporations and financial services committee hearing, Perth Labor MP Patrick Gorman asked Mr Price about the ASIC investigation into Queensland Nickel, which he had raised in a previous hearing.

Mr Price responded: "We did find material of interest in relation to that matter and things have moved on somewhat since we last spoke."

He then explained the watchdog served Mr Palmer with the complaint and summons – under s408C(1d) of the Criminal Code of Queensland and s184(2) of the Corporations  Act – on February 7, before alluding to further ongoing investigations around a "number of entities".

The charges follow separate court action launched by ASIC in 2018 – being fought by Mr Palmer – over an alleged breach of takeover law related to his troubled Coolum resort.

Through Mineralogy, Mr Palmer, who held the federal Sunshine Coast seat of Fairfax from 2013 until 2016, donated more than $80 million to his United Australia Party ahead of last year's election.