TikTok viral stars could make up to $1m per post, say researchers 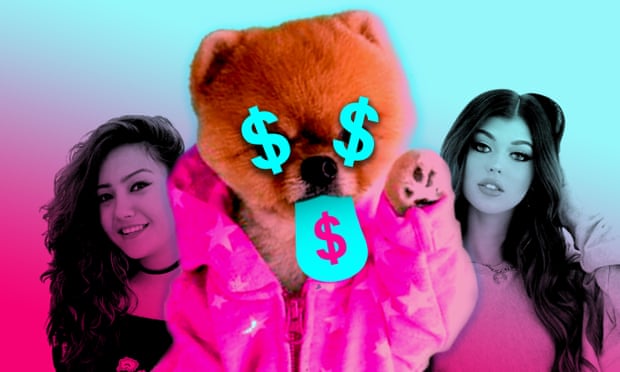 Teenagers used to aspire to become astronauts, firefighters, footballers or pop stars, but times change and so do career goals. Today, more than half of millennials and Generation Z-ers – those aged 13-38 – in the US aspire to become social media influencers, according to recent research.

The Chinese viral video app TikTok is the platform of choice for young people seeking to monetise their talents because it seen as rewarding anyone’s ability to entertain, whereas Instagram or YouTube tend to reward those who already have celebrity status.

And for a very lucky few, taking to TikTok could be a seriously lucrative career option. Marketeers reckon that the most popular TikTokers could currently charge close to $200,000 (£155,000) per post if they promote and collaborate with brands. Researchers at Morning Consult, a US tech research group working on behalf of the games company Online Casino, argue that TikTok is growing so fast in popularity that some influencers might even be able to charge nearly $1m per post by next year.

Loren Gray, a 17-year-old singer from Pennsylvania, is said to be the most marketable current TikToker, with researchers estimating she could charge as much as $197,000 (£152,000) per post.

Gray has more than 38 million followers on TikTok – which posts videos of between 15 and 60 seconds in length – making her one of the most-followed accounts. Gray has used her popularity on the app to secure record deals with Virgin Records and Capitol Records. She posts daily on the platform and her posts have received over 2bn likes.

Last year, the US fast food chain Chipotle paid Gray to participate in a “guac song dance-off”. The hashtag challenge – an official TikTok campaign in which a creator uses a specific hashtag for a sponsored video – was called #GuacDance. The campaign centred on a song about guacamole from the children’s music artist Dr Jean, and went viral.

Further down the top 20 is Jiffpom, a Los Angeles-based Pomeranian dog with 20 million followers – double his Instagram following – who could earn $100,000 per post, the report adds.

The report predicts that in a year’s time, Aashika Bhatia, a 19-year-old Indian actress, will be the most popular on the platform, with 194 million followers. She currently has 14 million and is gaining tens of thousands per day. The Bollywood actress posts TikTok classic videos of her lip-syncing and joking around. The popularity of posters like Bhatia is explained by the simplicity of the format, says the report: easy video design means short video clips can be created in minutes; music, dance and slapstick humorous clips transcend language barriers, which means they can be viewed on every continent; and the videos automatically loop to the next on the Tiktok feed, making it an easy watch.

Morning Consult estimates that popular TikTok stars could be paid up to $0.005 per follower for sponsored posts, which means a star like Bhatia could charge $973,000 per post if she reached the 194 million mark.

TikTok, which is owned by the Beijing-based tech company ByteDance, was valued at $75bn in 2018 when Japan’s richest man – Masayoshi Son – invested in it via his SoftBank venture fund. It claims to have about 800 million active users, which would make it more popular than Twitter and Snapchat combined, but trailing Facebook.

The company has been fined $5.7m by US authorities for illegally collecting children’s data. It has also been criticised for censoring videos that might upset the Chinese government, including mentions of Tiananmen Square or Tibetan independence.

The Snapchat founder, Evan Spiegel, said this week he was “a big fan” of TikTok and expected TikTok to surpass Instagram, which is owned by Facebook and said in 2018 it had passed the 1 billion active user mark.

“Social media in its original construct is really about status: representing who you are, showing people that you’re cool, getting likes and comments, those sorts of things,” Spiegel said last month. TikTok instead celebrates talent over status, he said, describing it as a platform for people to “make media to entertain other people”.

Paying just under $1m to a TikTok influencer for a post may sound like an unbelievable amount of money for a company to spend on marketing, but James Whatley, strategy partner at the marketing agency Digitas UK, said it showed how brands were shifting their attention and spending away from traditional media like TV and billboard advertising to partnering with “authentic influencers”.

“I can actually believe those numbers if you look at how much money has been thrown at Instagram,” he said. “[TikTok] is the hot new thing and tonnes of money is being thrown at it. The fastest way to get traction on TikTok is to get the number-one influencer to promote your stuff. Just this week TikTok and [computer game] Fortnite announced a partnership deal with a competition for a TikTok dance to be recreated on Fortnite.”

“Every year there is always a new platform and clients want to put 10% of their budget towards it. Last year it was Instagram stories, before that Snapchat. TikTok is the darling of 2020.”

Whatley explained that influencers can spread a brand further than their already huge number of followers, which can be greater than the population of small countries. “There are challenges on TikTok, for example you could pay an influencer to do a challenge but with a bottle of Diet Coke,” he said. “As soon as that person does it, all of their followers will see it and want to participate and recreate themselves, and then all their followers will do it also, and you’ve got yourself a viral sensation.”

Paul Lee, the global head of technology research at consultancy firm Deloitte, said he expected only a handful of people would be able to make a lot of money out of TikTok, but he said those who did could “really strike it big”.

“If you have 10 million followers it’s better than 5 million, obviously,” Lee said. “It’s quite a benign site. It’s happy, and of people doing fun videos. You go there to get uplifted, and it feels less commercial, which could actually make partnerships more valuable.

“Endorsements are always valuable, but it can be shocking how one person’s endorsement is worth lots more than other people’s. I don’t think mine would be worth so much. To become an influencer your timing has to be right, your look has to be right and you have to be super lucky.”